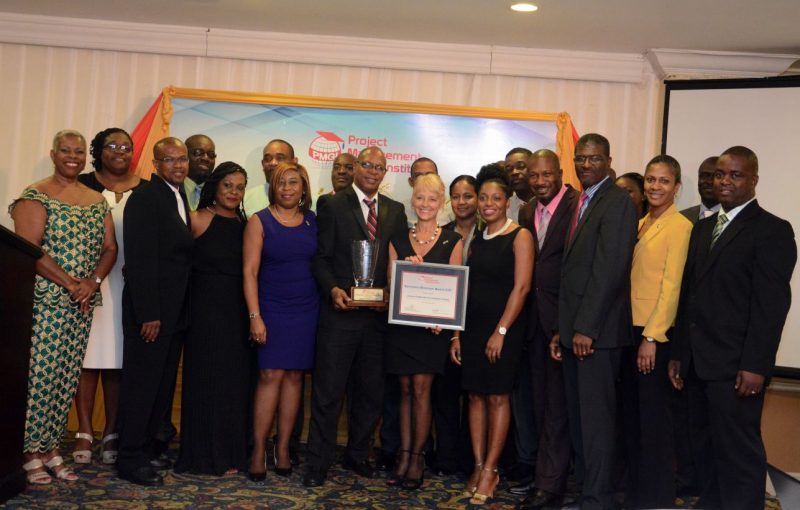 Kingston, Jamaica: – The Project Management Global Institute (PMGI) recently held its Accolades & Awards Ceremony December 14, 2016 at the Knutsford Court Hotel, honouring the institution’s 2016 achievers. Among those awarded were a number of employees of the Jamaica Public Service Company (JPS) who completed the Mastery in Applying Project Management (MAPM) certificate programme.   Consistent with its corporate culture and commitment to excellence, several of those graduates employed to the power company earned the internationally acclaimed Project Management Professional (PMP) designation during 2016 and were among the highest performing groups in the programme.  The highest achiever for the 2016 programme was an employee of JPS.

For its continued drive and commitment to staff development, the JPS received the prestigious PMGI Exemplary Employer Award 2016.  In recognizing the JPS for copping this award, Dr Nsombi Jaja, Quality Consultant and Lecturer at PMGI noted that, “Under the skilful leadership of its CEO, Mrs Kelly Tomlin, JPS has been transformed into one of the most successful energy companies in this part of the world.  They have re-imagined the company, trained and inspired a shared vision and encouraged staff to strive for excellence.  With consistent implementation of the project management principles delivered by PMGI since 2008, the company has successfully managed and executed capital exchange projects and has demonstrated its commitment to capacity building”.

Mrs. Sherrone Lobban, CEO of PMGI, applauded the JPS for it visionary approach to training and development and its dedication to capacity building among staff.   She reiterated that PMGI will continue to plant the seeds of success in the project management discipline in Jamaica and extended thanks to all the organisations who had invested in the human capital and ultimately Jamaica’s development.

The special award was accepted by the President and CEO of the Jamaica Public Service, Mrs. Kelly Tomblin who in her address noted how grateful she was for the recognition whilst sharing with the audience how she keeps herself and her staff motivated. She said “Big big vision will only come to fruition through execution and excellence”.  She noted that the change at the JPS came about mainly because they was able to provide a ‘big vision’ and a ‘big why’ for the seventeen hundred committed and brilliant people at JPS who then took action to make it happen.